Critical reviews of things of interest

Albert Speer: His Battle With Truth by Gitta Sereny is a psychological and historical profile of Albert Speer. Speer was Hitler’s architect and later, Minister of Armaments and War Production. At one point, he was groomed as Hitler’s successor. In the Nuremberg Trials he was one of the only Nazis to admit some responsibility for the war crimes of the Third Reich and to renounce Hitler. This admission saved his life and he was sentenced to twenty years in prison.

END_OF_DOCUMENT_TOKEN_TO_BE_REPLACED 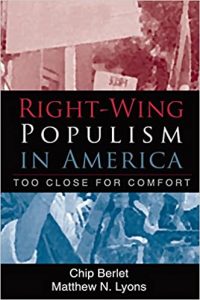 Right-Wing Populism in America: Too Close For Comfort by Chip Berlet and Matthew N. Lyons presents a thorough understanding of various manifestations of right wing populism in the United States. It traces the history of this socio-political movement from before the American Revolution until the year 2000. Berlet and Lyons go beyond caricatures to explore how right wing populism gains strength first by exploiting real economic, social, and political grievances, but then goes on to scapegoat perceived shadowy elitist puppet masters, typically Jewish bankers, ‘PC Police’, etc– and perceived ‘parasites’ from below–welfare recipients of color, recent immigrants, etc. The authors show that right wing populism is often an alliance between disaffected members of the elite and the working and middle class. These movements tend to emphasize their shared “whiteness” and sense of victimhood in order to bond together.

END_OF_DOCUMENT_TOKEN_TO_BE_REPLACED

Strangers In Their Own Land by Arlie Hochschild 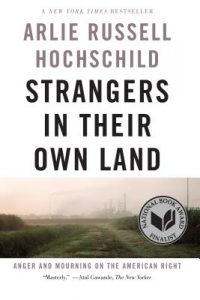 Strangers In Their Own Land by Arlie Hochschild is a must-read for anyone interested in going beyond conventional political analysis and exploring the “deep story” worldviews that shape thinking on both the left and right of the political spectrum. Hochschild describes “deep stories” as emotional images that shapes the essence of a person’s worldview, and this book was her attempt to understand the deep story that forms the ideology of the right wing. Hochschild is a UC Berkeley sociologist who spent five years in Louisiana in an attempt to break through the “empathy walls” that divide the political spectrum in the US. She worked to overcome her own biases as a member of the left-leaning political spectrum by forming human connections with conservatives in Louisiana, many of whom were Tea Party activists.

END_OF_DOCUMENT_TOKEN_TO_BE_REPLACED

Strangers In Their Own Land by Arlie Hochschild