On the Loss of Ritual

On the Loss of Ritual 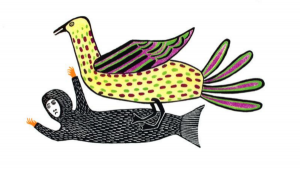 The legend of Sedna the Sea Goddess is the most widespread of Inuit myths. Because it has been orally passed down by generations of elders, the details of the story may vary.

This is one version of the story:

Some time ago, during a snow storm, a young stranger visits a family’s igloo. He is welcomed to spend the night, but by morning, he is gone. The father sees animal tracks leaving the igloo, and proclaims the family has been deceived.

Later, the daughter becomes pregnant, and out of shame, her father takes her to a small island and abandons her. The daughter survives because the family’s lead dog – the same animal who disguised itself as a young man and visited the igloo – swims out to her and brings her tender meat to feast on. Eventually, the daughter delivers six babies: three are Inuit children and the other three are half-human, half-dog hybrids. She makes a boat out of sealskin and sends the three hybrid children out to sea. Later, her father decides to retrieve her from the island. On their way home, a storm erupts, and her father throws her overboard to lighten the load and save himself.

When she tries to climb back onto the boat, her father cuts off the tips of her fingers. Her chopped fingertips become seals in the sea. He then severs her knuckles. Her knuckles then become whales. Then he chops off her hands, which become walruses. And so on.

Once her limbs have been cut, she sinks to the bottom of the sea, where she transforms into the half-fish, half-woman goddess called Sedna. Sedna now controls all of the animals of the sea, holding all the sea animals in her entangled hair and only releasing them when hunters provide her with offerings.

This myth inspired a long-standing tradition in Inuit culture called ‘skin stitching,’ a method that requires a needle, thread, and ink. Skin stitching differs from modern tattooing methods because the needle, dipped in dye, is sewn directly into the skin, to make the tattoo.

While missionaries all but quashed this tradition, this practice is seeing a re-emergence today, with projects like the Inuit Tattoo Revitalization Project, aiming to revive the practice across the Arctic.

Rites of passage like these traditional tattoos are practiced all around the world, from far flung tribal societies to developed countries. These rites, inspired by their region’s respective myths, are used as formal markers to transition into the next stage of life or to signify an accomplishment. Their inextricable link to sacred tales serves as a compass for children and adults alike. Myths are instructive; they act as guides. Rituals, in turn, provide us with purpose and act as benchmarks in our lives – especially for children transitioning to adulthood.

Rites of passage are also practiced in Western societies, though many aren’t tethered to mythology. Indeed, it is in the West that these rites are often lacking – or disappearing altogether. While formal rites of passage still exist, such as Sweet 16s and high school graduations, many of these rituals are increasingly absent, or practiced in new ways among younger generations.

Whether subconscious or not, most of us seek out rituals or initiations in whichever way we can. In The Power of Myth, Joseph Campbell writes, “Young people just grab this stuff. Mythology teaches you what’s behind literature and the arts, it teaches you about your own life. It’s a great, exciting, life-nourishing subject.” Kids are naturally drawn to mythology, but they seek myths out in different ways – in the 80s and 90s, kids found them in film and television, now they are found primarily through their digital devices.

We are already seeing how the disappearance of these rites is stunting personal growth.

Born between 1995 and 2012, Generation Z, or the iGeneration, makes up about a quarter of the U.S. population. Generation Z is looking to be the most educated generation – but also the most mentally fraught. It is also the first generation to never know a world without the Internet and the first to delay major adulthood milestones by several years.

One of these milestones is getting a driver’s license. For decades, a driver’s license was a rite of passage for teens. It signified ultimate freedom and independence. Teens who got their license were often more capable of independent decision-making than their counterparts who didn’t get licenses. But today? According to data from the Federal Highway Administration, about a quarter of 16-year-olds had a driver’s license in 2017, compared with 46 per cent in 1983. This change reflects a deeper trend of teens spending less time outside the home – and more time on their digital devices.

Today, U.S. teens spend more than 7 hours a day online – and that’s not including time spent doing school work. According to a study published by Clinical Psychological Science, this excessive time spent online is linked to a downward trend in mental health. The study, co-authored by Jean Twenge, a psychology professor at San Diego State University and author of Generation Me and iGen, found that teenagers between the ages of 13 and 18 who spent more time on their phones and on social media were more likely to report mental health issues compared to teens who spent more time in face-to-face interactions, doing homework, or doing other offline activities. On top of this, suicide is now the second-leading cause of death among youth between the ages of 10 and 34 years old. It’s no surprise then that Twenge declared Gen Z-ers to be on the brink of the worst mental health crisis in decades.

According to Twenge, part of this mental distress is attributed to digital devices – they have fundamentally altered the nature of social interactions, and subsequently delayed iGen’s development into adulthood.

As far as dating goes, younger generations are dating less and having sex less often, with experts citing delayed adulthood as a contributing factor. A study published by JAMA Network Open found that about 1 in 3 men between the ages of 18 and 24 reported no sexual activity in 2020. Of this downward trend in sexual activity, Twenge says, “These reproductive trends have not occurred in isolation; instead, they are part of a broader cultural trend toward delayed development. For example, adolescents in the 2010s were also less likely to drive, drink alcohol, go out without their parents, and work at paid jobs compared with adolescents in previous decades.” While some concerned parents may find relief in this trend, the decline in sexual activity is also impacting older generations. As Twenge notes, these trends don’t occur in a vacuum – they reflect deeper cultural trends that can be traced back to a loss of community and face-to-face connectivity.

Gen Z-ers are also more cautious and risk-averse than their parents. This is due to technology, according to futurologist Rhiannon McGregor. They’re partying less, drinking less, and they’re not working as many paid jobs compared to previous decades.

Millennials may have normalized this practice of delaying adulthood, embracing words like ‘adulting’ to describe a state of perpetual adolescence, but Gen Z-ers are giving them a run for their money. Younger generations are less equipped to handle adversity, less eager to seek out these milestones, and less likely to take part in traditional rites of passage.

When young people have no existing rites to follow in their own lives, they seek them out in other ways that may be harmful for them. Campbell calls this ‘self-rendered initiation’ in which young people create their own rites: they join gangs, take drugs, steal, among other dangerous – and often – illegal things that don’t support their personal growth, but still satisfy their need for initiation.

For the more risk-averse person, some of these milestones are now taking place online – younger generations are learning, watching, and spending the bulk of their free time online. Amid the pandemic, it wasn’t just younger generations impacted by this ritualistic purgatory – school exams, graduations, religious ceremonies, and weddings were either moved online, or cancelled altogether.

But in recent years, new forms of initiations are emerging.

More teens are being encouraged to turn inward and shift their focus onto their identity. Young people are taught early on to brainstorm and latch onto specific identities that will uniquely separate them from their peers: from gender identity to sexuality, the options for identification are endless. It’s a new form of initiation, where the rituals often comprise of changing one’s name, clothing, social groups, and even body, to signify entry into a new stage of life. It’s an initiation that is steadily gaining in popularity, with thanks to educators, parents, and institutions who readily sanction it.

Perhaps because of modern society’s distinct lack of mythology, it is much easier to create new rituals and initiations where there were few or none before. But because we develop initiations out of cultural trends, and not traditions or religions, we may be hindering the younger generation’s ability to enter adulthood, rendering them paralyzed and perpetually dependent on their parents and their peers.

Of course, we must also recognize that we are living in an age of immense social discontent and cultural decay. This period of tumult is precisely why rituals are needed more than ever, to guide us and give us purpose – but that doesn’t mean we must adapt fleeting cultural trends that may lead younger generations astray.