Anti-Oppression Politics is a Red Herring to Divert Our Attention from Empire, Inequality, and Class Solidarity

Anti-Oppression Politics is a Red Herring to Divert Our Attention from Empire, Inequality, and Class Solidarity

Why are the rich so much better at uniting around class issues than the plebes?

Red herring: a clue or piece of information which is or is intended to be misleading or distracting.

Outrage is a sentiment that feels so pure and so right. When it is pointed at injustice and burns bright inside of us we are reaffirmed as the moral beings that we believe ourselves to be. That our strongly held sense of righteousness could be a useful tool for others and even redirected to serve their purposes may seem impossible and even unbearable.

We look around and see oppression and injustice everywhere. We see how tribalism and intolerance toward powerless minority groups is rampant. We see police being brutal, especially to disfavored minorities. We see vast inequality and a small group of people on top who seem to have everything. We feel powerless.

We read about these problems and feel outrage. That outrage spawns huge social responses, organizing, educating, marching, speaking out. There is a vast and growing outrage industry to which we contribute billions. This money goes to causes and groups who are working against these wrongs such as BLM and many other social justice activist organizations.

We talk endlessly about these issues, argue, feel righteous, push people out of their jobs if they disagree, compel people to speak about oppression in a certain way with certain words, disallow other words and pull out the slogan ‘silence is violence’ for those who may simply not say anything. We have redefined concepts about free speech and critical thinking to prevent these core ideas from being challenged.

What we don’t do is ask hard critical questions about the outrage industry itself:

“The policy on lefty Twitter is that you never ask hard questions about #BlackLivesMatter, ever, and most people in establishment media write for the approval of lefty Twitter above and beyond any other motivation. $10.6 billion dollars were sucked up into a vague and amorphous social movement that has no defined boundaries or parent organization, and yet many of the biggest players in the media haven’t once asked where it went!” –deBoer

As our attention is caught up by this outrage industry which is relentlessly present on social media, academia and the mainstream press we can miss a lot of what is happening in our world.

Perhaps you might have noticed recently that Jeff Bezos, Lord Amazon, is about to blast himself off into space… for the fun of it. We will skip the jokes about one way tickets and just think for a moment as to how earth might look to him from that distance. Maybe the more distant perspective will allow him insights he might have already acquired if he were a simple earthling plebe rather than a master of the universe.

If Bezos blasted into space and looked down from that higher perch maybe he would notice something important about U.S. behavior in the world. He might see the recent U.S. bombing of Syria and Iraq, its endless wars and untold operations in the Middle East and Africa, hundreds of military bases across all corners of the globe, and its allyship with the rulers of places such as Saudi Arabia or Israel who wage their own campaigns of misery against poor, weaker people.

If Lord Bezos looked carefully on from his outer space perch, he might notice for starters that a huge percentage of the earth’s human population lives in poverty and some level of want and misery.

How do we react


Mainstream media is on a nonstop loop about social justice issues and identity politics. Performative antifascism, the kind that gets played out on social media, has made it difficult or even impossible to recognize the real thing. Voices we once relied on, like Amy Goodman of Democracy Now!, might once have used her platform to call our attention to people like Abe Osheroff, Abraham Linicoln Brigade veteran and lifelong combattant for universalist justice. But these days Goodman and Democracy Now! are all too often reduced to amplifying Democratic Party talking points and matters of identity politics.


As humans, meanwhile, we live inside of a set of organizing rules called capitalism, which is extremely good at production and extremely poor at distribution. Scarcity is the norm for the many and ease for a very small minority.

We can cover the planet with concrete but for some reason we’re unable to feed all our co-inhabitants. And it is the fate of many of the non-human species to be confined, tortured and eaten by the humans. For the rest, life is increasingly brutish and short as our degradation of their environment threatens their existence.

For the most part, these realities are not part of our day to day concerns. Unlike the outrage we feel and express daily in regard to social justice, our primary reaction to these issues tends to be a deafening silence.

In the years since 2008, the collapse of the global economy, and the short-lived rise of a populist stirring called Occupy, absolutely nothing has changed and things have only gotten worse. When was the last time you read the word ‘banksters’ or even heard mention of Wall Street in anything other than a positive context in the mainstream media?

There is a French anthropologist couple, Michel Pincon and Monique Pincon-Charlot, who have spent a career together studying the ultra rich. They have written numerous studies and books documenting their work. They conclude that the ultra rich are extremely good at networking and that they recognize their class solidarity as something above and beyond the petty differences of politics or ideology. The dominant class has learned, more than any other group, to act collectively and in solidarity to defend and expand their own class interests.

Meanwhile, the outrage industry, our substitute for genuine class solidarity, continues to thrive. Some 11 billion dollars has been collected by BLM since George Floyd’s death. 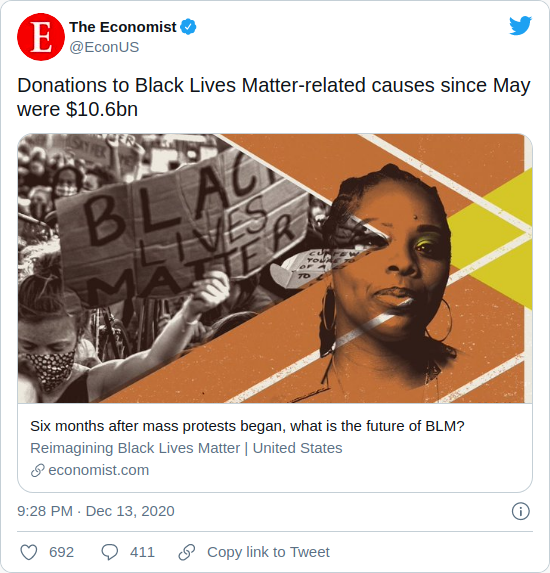 Very few are asking the serious questions about where has this money gone. But there is another question not being asked; where did it even come from in the first place? 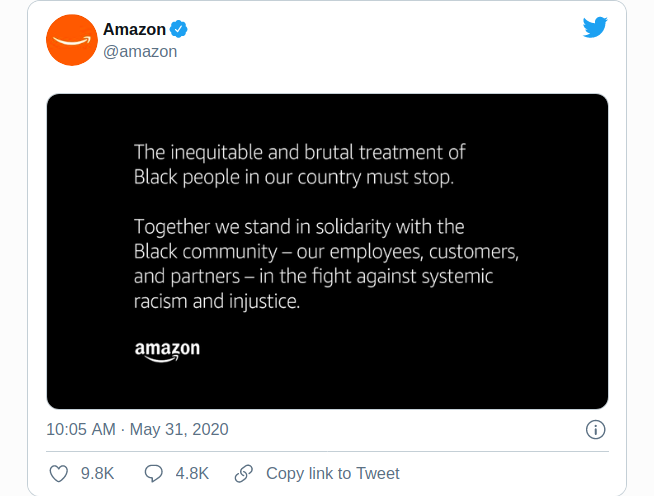 Tech companies across the board that have pledged support to BLM and other racial justice organizations include AirBnb, Cisco, IBM, Microsoft, Salesforce, Reddit, Uber, Google, Facebook and Amazon.

Wall Street supports racial justice!
In the rise to support the downtrodden, the Wall Street banks have not been slackers. JPMorgan Chase, Citigroup, Goldman Sachs have all pledged significant amounts in support of racial justice.

Bank of America announced today that it is making a $1 billion, four-year commitment of additional support to help local communities address economic and racial inequality accelerated by a global pandemic. The programs will be focused on assisting people and communities of color that have experienced a greater impact from the health crisis. – Bank of America

Defense contractors support social justice!
And what about our defense industry, the ones who supply our military, make our empire possible and directly benefit (to put it plainly) from the deaths and misery of mostly people of color across the globe?

Raytheon, one of the largest U.S. defense contractors and manufacturer of the empire’s weapons, bombs, and drones pledges “$25 million commitment to support marginalized individuals and communities through programs focused on racial justice, empowerment and career readiness.”

Hedge funds support social justice!
Blackrock, the mother of all predatory capitalist firms,” the world’s largest asset manager, with over $8 trillion in assets under management…” which “operates globally with 70 offices in 30 countries and clients in 100 countries.” is totally committed “to advance racial equity and inclusion”

The security state supports social justice!
Federal agencies, particularly those three letter agencies who are part of the security complex, may not be making showy donations to BLM like their corporate counterparts. However, their public relations campaigns do spill over into public consciousness from time to time. Linger for a moment over this recent CIA recruiting video and meet Mija, CIA employee, intersectional, Latinx, cisgender and millenial. Who could doubt, after watching this video, that social justice is the number one priority of the Central Intelligence Agency? 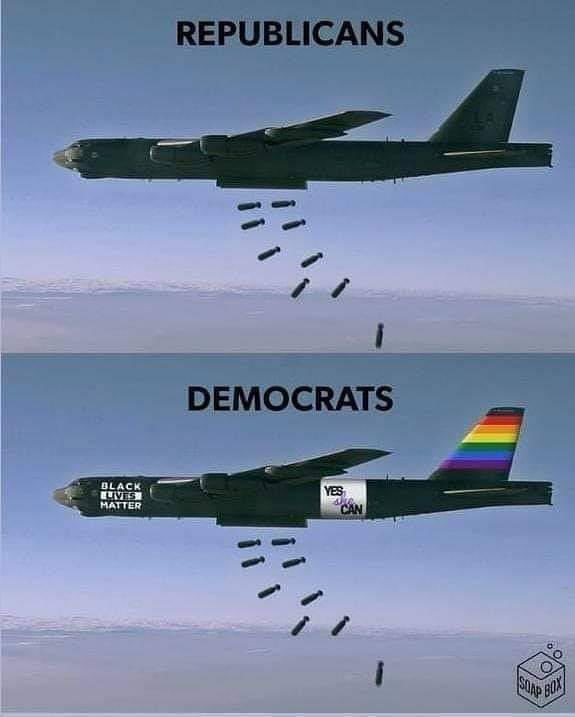 The question remains, why do social justice movements and the major corporations that support them, ignore the murder of people of color who happen to live elsewhere in the empire? The corporations that are celebrating rainbow pride and pledging millions for social justice are the same ones profiting from the continuation of our endless imperial wars.

The difference between how we perceive ourselves and how the rest of the world experiences our empire couldn’t be more stark. A poll from just last May queried people from 53 countries who agreed that the U.S. was a bigger threat to democracy than any other country and that overall, the single issue, inequality “…is seen as the biggest threat to global democracy”.

Where are the voices speaking up for class solidarity, universalism and against this crushing inequality? People on the left write article after article about Republicans being Nazis and the ‘biggest threat’ to the world. Conservatives write article after article about how the woke left represents ‘the reincarnation of Pol Pot and Stalin’. Neither side can see the real problem which lies before them in plain sight.

We continue to pump our dollars into the same monopolistic corporations that own our politicians. We continue to give our money to the corporations that pretend to care about police murders in the U.S. while ignoring the deaths our empire inflicts on people of color throughout the world. And they are the same people who pretend to care about something they call ‘equity’ which is used as a tool to deflect attention from unprecedented inequality, debt slavery, widespread poverty, and the relative helplessness of people throughout the world that is due to their massive profiteering.

Yet, there are adequate resources in the world to satisfy the material needs of every human.

We allow our blind consumerism to support the dominant elites that oppress and are destroying the entire planet. We have lost sight of the real culprits. Identity politics and the ferocious arguments such a politic invites is the best tool they have to divert our attention away from them.

The oligarchy that rules us, the dominant class of elites, use the power of their money and their mainstream media platforms that they own to encourage us to fight amongst ourselves. They throw dust in our eyes and ensure that while we fight each other we remain docile and passive towards them. And so the machine of empire and death, inequality, misery, and planetary destruction is allowed to grind on for another generation.

See also: How about a coup against Silicon Valley and Reclaiming Populism

Follow Plebity
If you appreciate this article and the work it represents please join our Patreon community and support the Free Speech Fund and help make it possible for Plebity to continue to do this work.
Capitalism class consumerism economics history identity politics Populism
Subscribe
0 Comments
Inline Feedbacks
View all comments