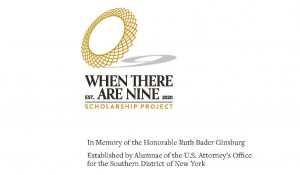 A new scholarship for “women law students” established in 2020 to honor the memory of Ruth Bader Ginsburg, is open to anyone who “self-identifies” as a woman. The stated mission of the scholarship, which offers next year’s recipients the significant amount of $10,000 per year, is “to advance equity and diversity within the legal profession by expanding career opportunities for women attorneys and supporting those attorneys in their legal educations and careers.”

The scholarship is open to “all women, including students who consistently live and self-identify as women, regardless of their gender assignment at birth.” The application form asks applicants to indicate their “gender identity.”

This news comes as academia in the United States continues to succumb to the truth denialism, female-erasure, and authoritarian nature of gender identity ideology. Earlier this month, Plebity published an interview with a medical student who blew the whistle on their institution’s biology-denying curriculum. Details from the bombshell piece include descriptions of professors avoiding the words “male” and “female” out of fear of causing offense, and teaching students that sex is a social construct.

The scholarship specifies that the amount of the financial award is subject to change, and additionally promises career advancement services. Recipients of the scholarship also have an opportunity to apply for additional funding in order to “forego paid summer employment” in favor of unpaid, public service based internships. In short, this is a potentially life-changing opportunity for law students, especially in a highly competitive year which saw law school applications increase by 20%. The cost of law school tuition at top universities such as Stanford and Harvard is nearly $70,000 per year.

That this prestigious new women’s scholarship is open to males who self-identify as women means that opportunities which claim to be for women could be awarded instead to men.

A member of the scholarship project’s Steering Committee, Rebecca Monck Ricigliano, describes the motivation behind the scholarship as such: “We want to honor Justice Ginsburg’s legacy by helping women entering or in law school with financial difficulties. Women who may not see a path to success right now, but who, if given the chance and the same mentoring, support, and guidance we benefitted [sic] from, would make superb lawyers,”

According to a recent press release, “The idea for the Project was born the weekend that Justice Ginsburg passed away.”

Another member of the Steering Committee, Amanda Kramer, explains the story behind the name of the scholarship project, “When There are Nine”: “One of our earliest decisions was naming the Project. We drew inspiration from Justice Ginsburg’s vision for true equality and equity for women, which is exemplified by her response to a recurring question about the number of women on the Supreme Court. When asked ‘when will there be enough’ women on the Court, Justice Ginsburg answered, ‘when there are nine.’ Although her answer was shocking to some, she matter-of-factly and accurately pointed out that ‘there’d been nine men, and nobody’s ever raised a question about that.'”

Other law school scholarship opportunities listed as “women’s scholarships” also specify that they are open to males who identify as female, such as the Ms. JD Summer Public Interest Scholarship, which is open to “all law students who currently identify as women, or who have previously lived as a woman (or girl) and now identify as non-binary.”

The When There are Nine Scholarship Project did not provide comment when contacted by Plebity for this article.

If you appreciate the journalism this article represents please join our Patreon community and support the Free Speech Fund and help make it possible for us to continue to do this work.