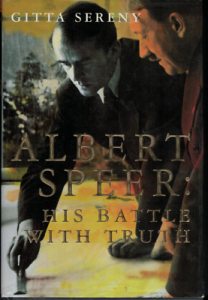 Albert Speer: His Battle With Truth by Gitta Sereny is a psychological and historical profile of Albert Speer. Speer was Hitler’s architect and later, Minister of Armaments and War Production. At one point, he was groomed as Hitler’s successor. In the Nuremberg Trials he was one of the only Nazis to admit some responsibility for the war crimes of the Third Reich and to renounce Hitler. This admission saved his life and he was sentenced to twenty years in prison.

Sereny was an Austro-Hungarian journalist and author. She was anti-Nazi and present in France during the occupation. She interviewed and researched Speer for over a decade, along with many of his companions and contemporaries.

Unlike many journalists and authors, Sereny did not allow her privileged access to her subjects to dissuade her from critical analysis. Throughout her book, she repeatedly exposed Speer’s deception regarding his claim that he was ignorant of the Holocaust through her extensive research of his life and from the testimony of his associates and family members.

However, this book did not engage in “gotcha journalism,” Sereny presents a nuanced portrait of Speer that shows both his positive and negative sides. Her thought provoking writing explores themes of individual and general culpability, redemption, and acceptance of responsibility as a means to deny wider guilt..