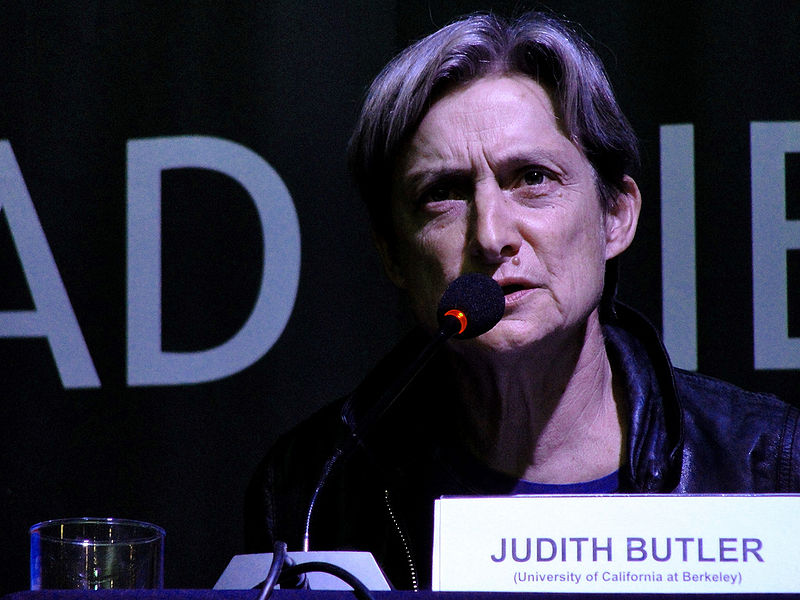 Licensed to the public under the Creative Commons Attribution 2.0 Generic.

The synopsis below was originally posted on Redline and is written by Daphna Whitmore.

This is the third in a number of synopses of a critique of postmodernism from the book Cynical Theories: How Universities Made Everything about Race, Gender, and Identity – and Why This Harms Everybody by Helen Pluckrose and James Lindsay. Swift Press, 2020. The first synopsis, which covers the early period of postmodernism, is here, the second on queer theory and its influence on postmodernism is here.

Butler follows Foucault closely and describes a vast social conspiracy which is both intentionally and unwittingly played out. The “regulatory fictions” of sex, gender, and sexuality are maintained through the ubiquity of gender performativity according to Butler. For her, the mission of Queer Theory and activism is to liberate “the performative possibilities for proliferating gender configurations outside the restricting frames of masculinist domination and compulsory heterosexuality”.

She uses the Derridean notion of phallogocentrism – the idea that social reality is constructed by language that privileges the masculine. She expands upon Adrienne Rich’s concept of compulsory heterosexuality- wherein heterosexuality is taken as the natural state of being, and homosexuality is therefore scripted as a perversion, to enforce compliance with “doing straightness”. Butler believes it is impossible to step outside of social constructions created by discourses: we can only trouble and disrupt them, to make space for those who do not fit.

Butler proposes the politics of parody to get people to question the assumptions upon which performativity is based in order to be able to see it as a socially constructed illusion that is arbitrary and oppressive.

Butler even calls into question whether biological sex can be considered anything other than a cultural construct. In Gender Trouble she writes: “If the immutable character of sex is contested, perhaps this construct called ‘sex’ is as culturally constructed as gender; indeed, perhaps it was always already gender, with the consequence that the distinction between sex and gender turns out to be no distinction at all.”

She also poses this rather incomprehensible question: “Is the construction of the category of women as a coherent and stable subject an unwitting regulation and reification of gender relations?” That is, might the ways that we consider “woman” to be a real biological category have the unintended consequence of creating a “coherent and stable” notion of what it is to be a woman?

She describes as a kind of violence of categorisation the scripting of people into a category, such as a gender, that they feel does not adequately or accurately describe them. Activism and scholarship must disrupt these discourses to minimise the apparent harms of this “violence”.

This “breaking down categories by rendering them apparently incoherent” is central to another postmodern theorist Eve Kosolfsky Sedgwick whose work lies at the foundations of Queer Theory. In her book, The Epistemology of the Closet, she developed Foucault’s idea that sexuality is a social construct. However she reversed Foucault’s belief that dominant discourses created homosexuality and heterosexuality, arguing instead that it is the binary of homosexuality and heterosexuality that gave us binary thinking.

The closet to Sedgwick symbolises occupying contradictory realities at the same time some people will know one’s sexuality and others will not, according to Sedgwick. Like other postmodernists she is focused on language – specifically “speech acts” – as the way in which these “unjust binaries” and “the closet” were constructed and maintained. Like Derrida she calls for deconstruction, and seeks to deconstruct heteronormativity. She seeks to undermine the stable sense of meaning for concepts to help us “accept the complexity and mutability of sexuality”. Here she shows a commitment to rejecting objective truth and concrete categories and the idea that incoherence and fluidity are liberating and politically necessary.

Queer Theorists expand this thinking to encompass almost anything and they think of this as “queering” the topic. Theorists have, for instance, queered categories of time and history and life and death. The postmodern knowledge principle in which objective reality is denied or simply ignored, and the postmodern political principle, which insists that society is structured of systems of power and privilege that determine what is understood as knowledge, are front and centre in queer Theory. They are most evident in its foundational concept that science is a form of oppressive discipline, which enforces gender conformity and heterosexuality by establishing categories and attempt to assert truths about them with rigorous authority and social legitimacy.

Blurring of boundaries and intense focus on language are central to queer Theory. They are hostile to the concept of a stable reality that we can discuss. It makes the blurring of boundaries into its preferred form of political activism and calls it “queering”. There is an almost pathological obsession with the ways sex, gender, and sexuality are spoken about. This has led to a proliferation of terms demarcating subtle differences in gender identity and sexuality, demanding impossibly extreme sensitivity of language.

Queer Theory assumes that understandings of gender and sexuality are always cultural constructs. With its focus on deconstructive techniques and its conception of knowledge as a construct of power, queer Theory is, arguably, the purest form of applied postmodernism. It underlies much trans activism and makes an appearance in multiple forms of Social Justice scholarship.

Perhaps most significantly, queer Theory differs fundamentally from earlier feminism and LGBT activism that preceded it. Pre-queer Theory liberal activism and thought focused on changing prejudiced attitudes towards people of a certain sex, gender, or sexuality by appealing to our many commonalities and shared humanity.

Queer activists reliant on Queer Theory tend to act with surprising entitlement and aggression – attitudes which most people find objectionable – not least by ridiculing normative sexualities and genders and depicting those who recognise them as backwards and boorish.

The idea that heterosexuality is a social construct completely neglects the reality that humans are a sexually-reproducing species. The idea that homosexuality is a social construct neglects the plentiful evidence that it is also a biological reality. Queer Theory threatens to undo the considerable progress made by lesbian and gay activists in countering the belief that their romantic and sexual attractions are a mere “lifestyle choice”.

Although Queer Theory purports to advocate for lesbian, gay, bisexual and transgender people, the majority of LGBT people are neither familiar with it, nor support it. As it continues to assert itself as the only legitimate way to study or discuss topics of gender, sex, and sexuality, then, it also continues to do harm to the causes it seeks most interestedly to support.