Marguerite Stern and the betrayal of the left
By Mark White
August 26, 2022 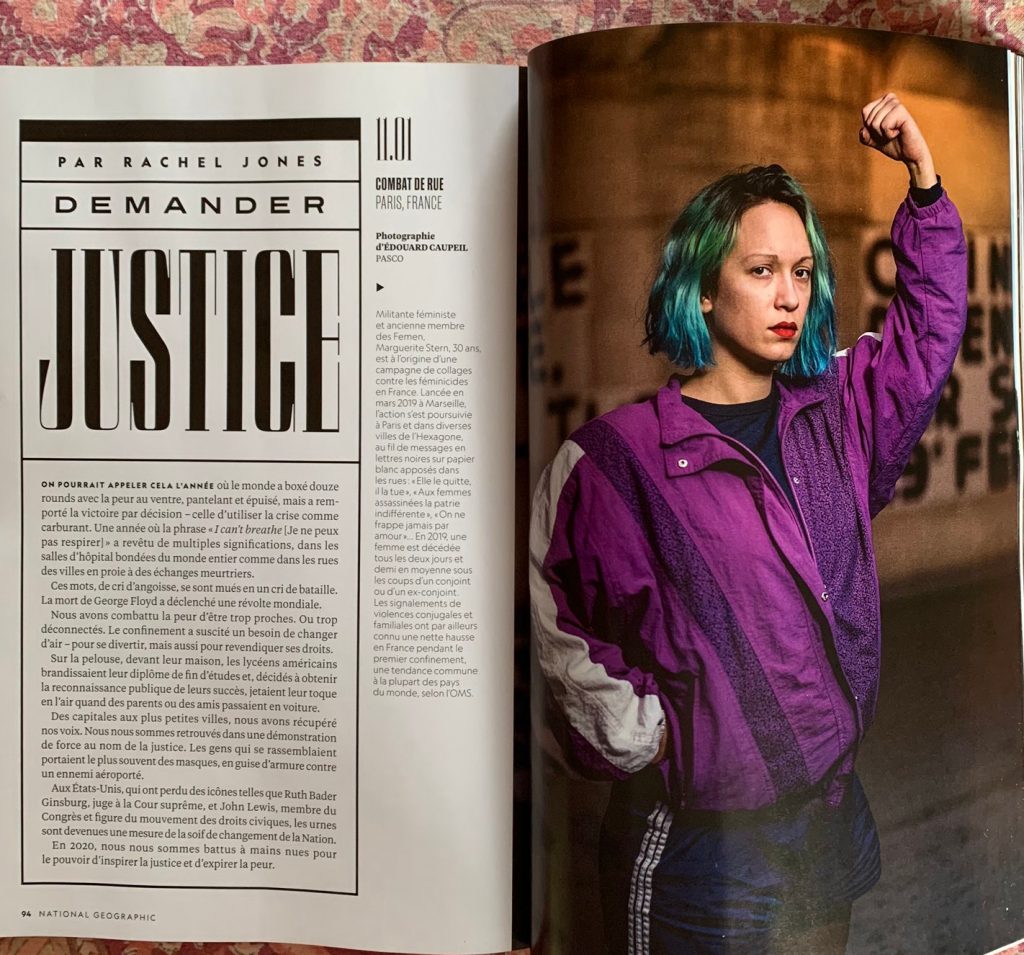 Marguerite Stern featured in the print version of the January 2021 National Geographic Magazine (France) to illustrate the word Justice. The picture and accompanying text appear to have been removed from the online version of the magazine although the image of Stern is still found on their site here.*

Who is Marguerite Stern

In May 2013, Marguerite Stern went to Tunisia with two other members of the group Femen to show support for imprisoned Tunisian feminist, Amina Sboui. This landed Stern in a Tunisian prison and gained the attention and sympathetic support of (among others) the president of France, the chancellor of Germany, and the European Union.

Stern’s experience in Tunisia would not be her last run-in with authorities. Later that same year, Stern, again with other members of the group Femen, was arrested after staging a protest in the cathedral of Notre Dame in Paris—in protest against Church homophobia. This time they faced widespread disapproval, which Stern reacted to at the time by saying, “…positive or negative comments, they are all good. The important thing is to start a debate.”

When Marguerite Stern returned to France after a month in a Tunisian cell, it is unlikely she could have foreseen how less than a decade later she would become the target of a wave of anger unleashed at her from her own political camp—the left.

Stern couldn’t have imagined that she would go on to found a nationally celebrated movement to raise awareness about femicide. She would certainly not have imagined that this movement would spread beyond France, to Belgium, Switzerland, Spain, Portugal, Poland, the UK, Canada, Italy and elsewhere. The distinctively styled block letter banners have become almost universally recognizable since Stern created the first one in 2019.

The story of the movement, Collage féministe would also inspire a film. The documentary, Riposte féministe (roughly translated as ‘Feminism strikes back’), was screened at the 2022 Cannes Film Festival and widely reviewed in French media.

To Stern’s surprise, this film not only erased her role as founder and leader of the movement that it portrayed, but eliminated her completely from the whole story. She was erased from the picture as completely as any out of favor Soviet bureaucrat who had offended Stalin.

When the French police arrested Stern in 2013 for protesting in Notre Dame, they charged her with a form of blasphemy – “profaning the Church.”  When Tunisian authorities put her in jail that same year, it was for ‘offending social morals,’ a flavor of blasphemy in a religious society.

In 2022, Stern was accused and convicted of blasphemy once again. Only this time it wasn’t in a court of law. This time it played out on social media and in the streets, and it was orchestrated by the members of her own political family.

Political purges often combine erasure with harassment. That is what Stern has experienced since some of her views fell out of favor with the liberal-left. Stern’s radical feminist opinions on wearing the veil (a hot-button issue in France), about prostitution, and about transgender ideology immediately made her a pariah.

Stern is routinely accused of being right-wing or even fascist. This has become the all too typical response toward anyone on the left who strays from the allowed positions.

“When I was inside Femen the threats were coming from the extreme right and the Islamists, people that you really fight against, but now it is coming from people who call themselves feminists. I really don’t know how to deal with that.” –Marguerite Stern

Most significantly, Stern held her ground on the single issue that has become the untouchable third rail of leftist politics—transgender ideology. Her ultimate heresy was to insist, consistent with her radical feminist views, that human biology is real and immutable.

On March 7, 2021 a group of radical feminists were staging a small protest in Paris against prostitution. A counter demonstration formed in opposition to Stern’s views on transgender ideology. Everything turned very ugly when the counter demonstrators began chanting, shouting threats, ripping banners out of the hands of the radical feminists and eventually throwing eggs.

The egg that hit Stern in the face that day was just the latest blow in a long pattern of harassment.

Since Stern expressed her heretical opinions, she has had to leave her job volunteering at an immigrant camp—‘the jungle’ in Calais, France. She has faced non-stop online harassment in the form of personal attacks that rarely address the substance of her arguments. She has received death threats. She had a bullet fired at her apartment window. She has had to leave the squat where she lived. Her notoriety makes it impossible to get a regular job. She has been ostracized by the activist movement she founded and led. She has been erased from her own story.

“I consider myself a leftist, of course, I’m anti-capitalist, anti-racist. I’m a leftist, of course. But when you are a leftist you are also for women’s rights and against the canceling of women. And for me that’s radical feminism. I’m on the blacklist now, maybe not until the end of my life but for many years.’ –Marguerite Stern

Where progressive media in France once called Stern regularly to get quotes or invite her to interviews, such as this one on national French radio, they have now turned their back on her.

It has been left up to right-wing media to tell her story.

When the dissident tells their story to the only ones who will listen, right-wing media, this is taken by the mob as confirmation that they were conservatives all along.

We see the same thing happen in the U.S. when a leftist speaks out in disagreement with some aspect of progressive ideology. Perhaps they are fired from their job due to mob pressure. Perhaps, like Stern, they receive death threats or lose their place of residence. Perhaps, as it was for Kara Dansky, it means being shunned by former colleagues at the ACLU where she was an attorney.

Progressive media stays silent or dismisses these heretics as right wing fascists. The conservative media, on the other hand, plays their story with relish. When a dissident tells their story to the only ones who will listen, right-wing media, this is taken by the mob as confirmation that they were a conservative all along.

Even the strongest back down

Matt Taibbi, one of the most battle-hardened, independent journalists in the U.S., has admitted to self-censoring on one particular issue—transgender ideology.

Early in 2022, Taibbi recorded an interview with radical feminist and leftist Kara Dansky. Unfortunately, he couldn’t bring himself to publish the interview. About six months later, Taibbi did go on to post the interview. To his credit, he apologized to Dansky and was transparent about why he had hesitated for so long. In his words, “I originally sat on this interview in an effort to avoid dealing with blowback from trans activists. “

“The feminist author of The Abolition of Sex has become the ultimate example of a new propaganda phenomenon, which denounces leftists as right-wing when they say unpopular things” -Matt Taibbi

Taibbi describes Dansky as perhaps “the most outspoken feminist in America when it comes to criticizing popular current beliefs about gender identity”.

Like Marguerite Stern in France, Kara Dansky is also, “the ultimate example” as Taibbi puts it, “of a new propaganda phenomenon, which denounces leftists as right-wing when they say unpopular things”.

By viciously shutting down even the mildest of critiques, ideological purity police have wreaked havoc on the leftist values of freedom of speech and open discourse. They have created a climate of fear that has silenced critical thinking and led even some of the strongest voices to self-censor.

Stern is a leftist

Marguerite Stern embodies everything that the left should honor

The anger directed at Stern may be genuine, but that doesn’t make it excusable. The left is an ideology that has roots in profound concerns for social and racial justice and dignity. But that liberal-left today has lost its way.

A movement incapable of accepting the slightest dissent, that demands ideological conformity to such an extreme degree, will never achieve its goals.

Marguerite Stern is a self-described leftist and radical feminist, with a career of street activism that has come at great personal cost. She embodies everything that the left should honor.

Stern may not be Alfred Dreyfus, the French Jewish army officer falsely accused of treason in 1894. The Dreyfus case turned the whole country inside out and is still controversial today. It would be hyperbole to overdo the comparison, and Stern isn’t going to prison on Devil’s Island. But for Stern, as it was for Dreyfus, the shame is all on her accusers.

Marguerite Stern was the first recipient of a grant from the Plebity Free Speech Fund in January, 2021, and we also wrote about her here. Listen to Marguerite tell her story in her own words (and in English) in this interview with Plebity.

*Plebity reached out to National Geographic (France) to ask if this picture and text of Marguerite Stern had ever been part of the online version, if it had been removed and why. We have not heard back. 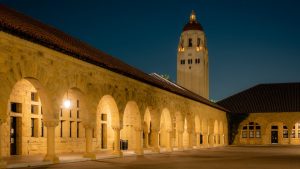 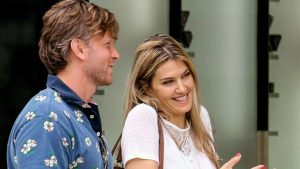 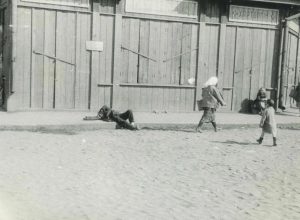